Taken from the Microsoft Developer and Designer Tools 2008 Product Guide : 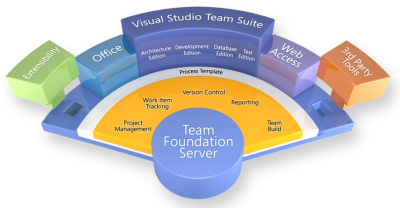 What will be different in Visual Studio Team System 2010? VSTS 2010 will bring some new capabilities that make it easier for all contributors on the software team to participate throughout the life cycle; from the core developers and testers to the wider team of project managers, designers and business analysts.

The picture shows that there will be only 3 client editions of Visual Studio Team System. Hey, what happened to the Database Edition? Well, in VSTS2010, the feature set of the Development Edition and the Database Edition will be merged into 1 single product : the Development Edition. Read more on this in the press release of September 29, 2008. New is that there will now be support for working with Team Foundation Server in the Expression Tools. There will also be more support for SharePoint development and on the other side SharePoint won’t be required anymore to install Team Foundation Server. The Test Lab Managementproduct is a new server product that targets large organizations who want to test a variety of configurations in a virtual lab environment. With that new product you will get the ALM experience on top of virtualization.

In my journey so far to explore VSTS2010 I’ve seen a strong focus on the Team Architect Edition and the Team Test Edition. There are also some big improvements in the Team Foundation Server product. VSTS2010 can really be seen as a very big release : v2 of Team System after v1.5 in 2008 and v1 in 2005. Before the release of Visual Studio Team System in 2005, Visual Studio was only a tool for developers to write code. With the release of Team System in 2005, Visual Studio became an integrated collaboration tool for all stakeholders in the development process and that was a big change! With the upcoming release of VS2010, Microsoft continues to focus and invest in a solution for managing the entire application lifecyle.

This entry was posted on Monday, December 8th, 2008 at 9:28 pm and is filed under Announcements & Releases. You can follow any responses to this entry through the RSS 2.0 feed. You can leave a response, or trackback from your own site.

One Response to VSTS2010 : The Big Picture